Met Gala 2017: All the Celebrities in Avant-Garde Theme

Met Gala 2017 happened on May, 1 in New York, the annual fundraising event for the Metropolitan Museum of Art’s Costume Institute. This year, Met Gala honored Comme des Garçons designer Rei Kawakubo, popular for her The Avant-Garde designs. The biggest celebrities, models, designers, and VIPs attended the glamorous gala while walking on the blue carpet. Yes, it was not a red carpet this year! From Rihanna to Serena Williams, every celebrity rocked in their own way.

Pharrell Williams, co-chair of the “Rei Kawakubo/Comme des Garçons: Art of the In-Between” exhibition was dressed in Comme des Garçons from head-to-toe. The “Happy” singer wore a black moto jacket, a plaid shirt which was paired with custom vintage jeans that read “Rei” right below his left knee cap as a tribute to the famous designer. The co-chair’s wife Helen Lasichanh wore tomato-red onesie along with a blonde topknot which was also designed by CdG.

Rihanna Stepped Out with Her Slaying Looks

The internet collectively agrees on very few things, but when it comes to “Met Gala 2017,” everybody is sure that Rihanna rocked it. Undoubtedly, Ri has always been a fashion maven, her excellence at fashion biggest event made her a style icon of the night. Just like 2015, Rihanna slew it this year as well by fully following the theme. The singer wore Comme des Garçons dress from fall, 2016.

On Tuesday morning, Lady Gaga praised Rihanna’s puff pastry dress. The singer wrote, “Best dressed in my humble opinion was Rihanna. She captured the spirit of the night and emotion of #Kawakubo #CommeDesGarcons.” 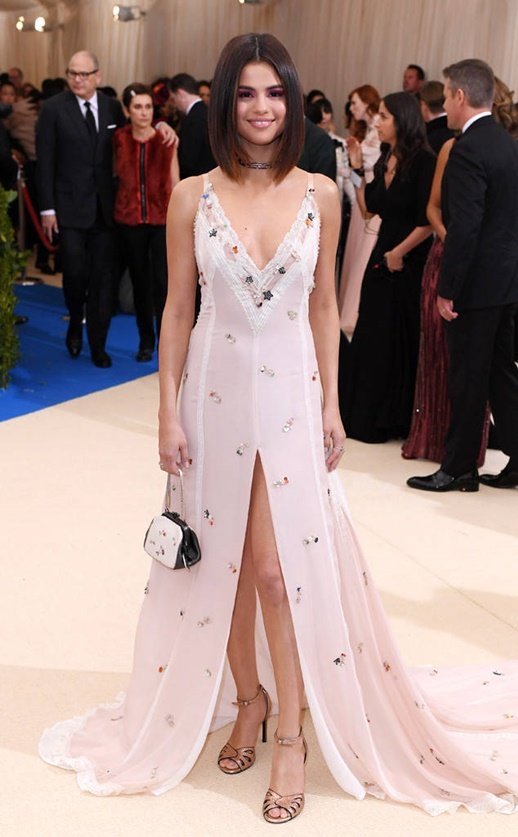 The talented singer and actress arrived at the Met Gala with her boyfriend, The Weeknd.

Hot Selena was styled by Kate Young and wore a Coach design, with adornments dredged all-over, by Stuart Vevers. Also, she was wearing a choker and rosy pink eyeshadow which made her look even more beautiful effortlessly.

Hold on! Did you notice Gomez’s purse?

She made her first red carpet appearance with The Weeknd. The new couple showed affection to each other, but her pint-size handbag advertised a big message on it about self-love. Her bag read, “Love yourself first.” Gomez, you are completely right about this!

Salena Gomez And The Weeknd Look Gorgeous Together 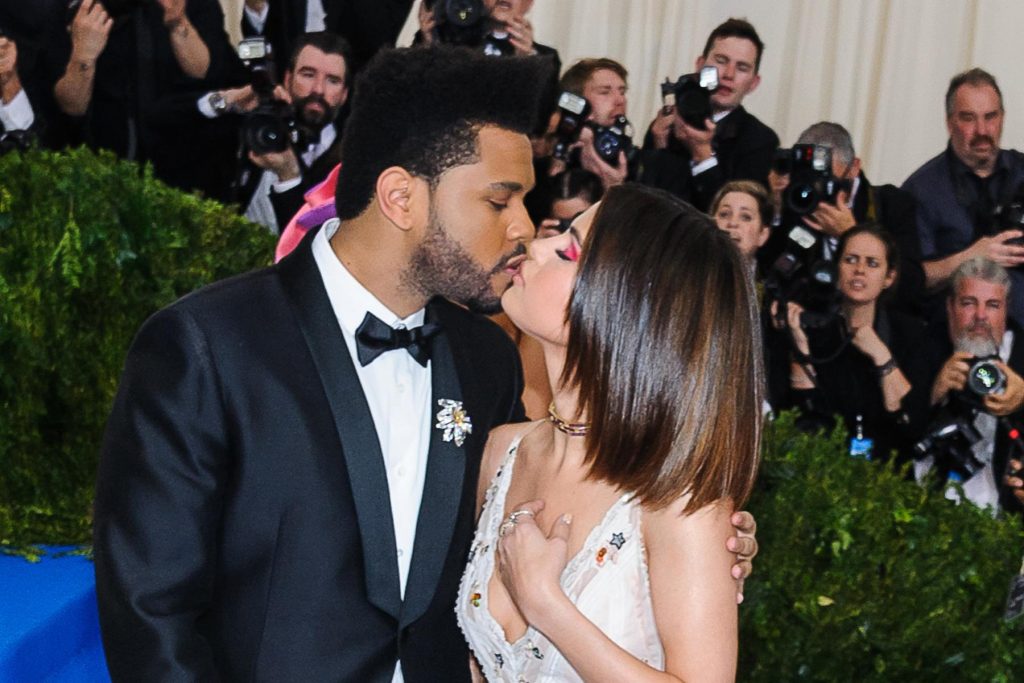 The Weeknd and Selena was the best-dressed couple at the Met Gala. But, the singer also held on his own on Monday. The Weeknd looked so handsome in his classic black satin shawl-collar tuxedo made by Valentino. His silk bow tie and patent leather tuxedo shoes complimented his black tuxedo.

After a closer look, anyone could notice the singer’s accessories, courtesy of Cartier, he was actually wearing one of the best jewelry of the night. He was wearing a diamond brooch from the Cartier collection, one of the jewelry which is only reserved for red carpet appearances. 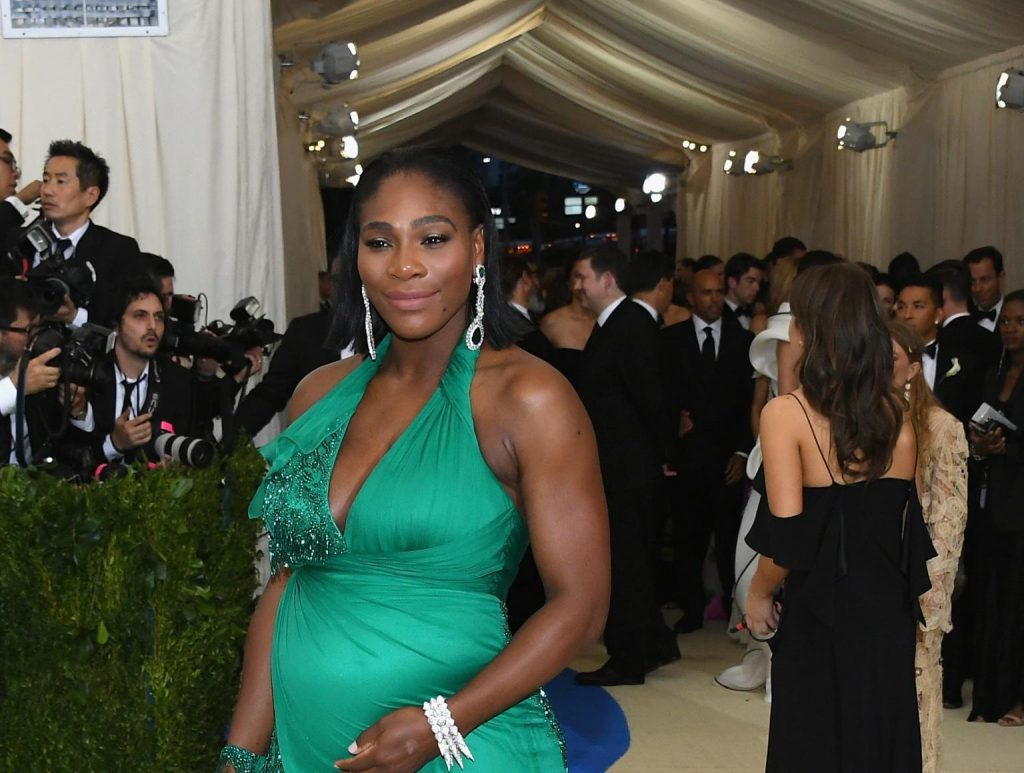 Mommy-to-be Serena Williams, the tennis star attended the Met Gala while glowing in a green dress, showing off her growing baby bump.

The star is expecting with her fiancé Alexis Ohanian, however, the reveal about her pregnancy was made by accident. Despite of her pregnancy, Williams managed to shine on the red carpet anyway with Atelier Versace dress, and Kesha McLeod’s style. 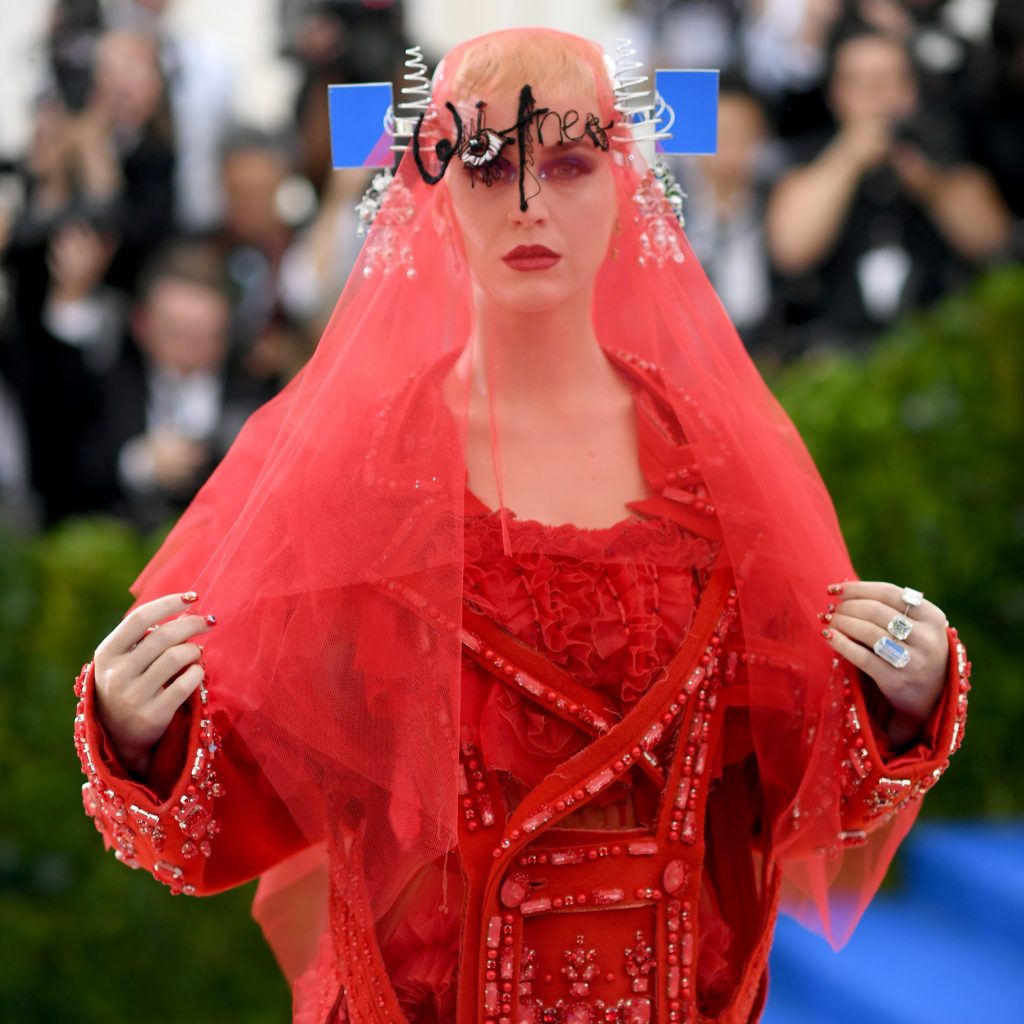 Just like Rihanna, the stunning Katy Perry also followed the avant garde theme at the Met Gala event. The singer served as one of the co-chairs of this year’s Met Gala. 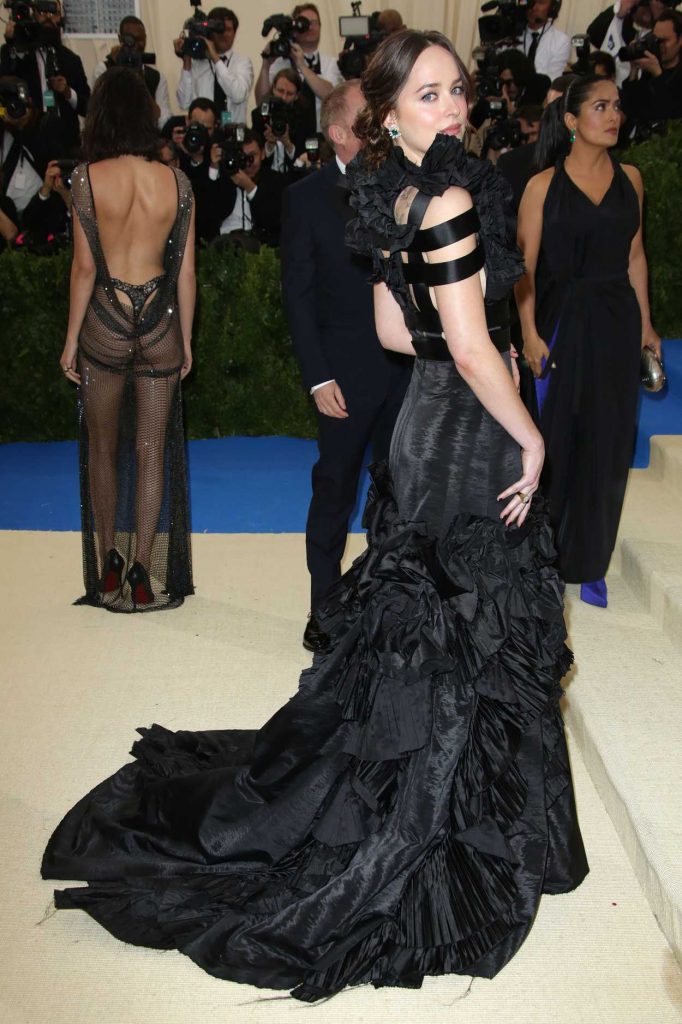 The fifty shades actress looked stunning at the Met Gala 2017 in black Gucci gown. Her dress was designed in a way which completely went with the theme of the big night. Dakota’s costume involved straps, cutouts, a plunging neckline, geometric folds, and a short train. Johnson complimented her outfit with classic emerald diamond earrings and an amber-colored statement ring. 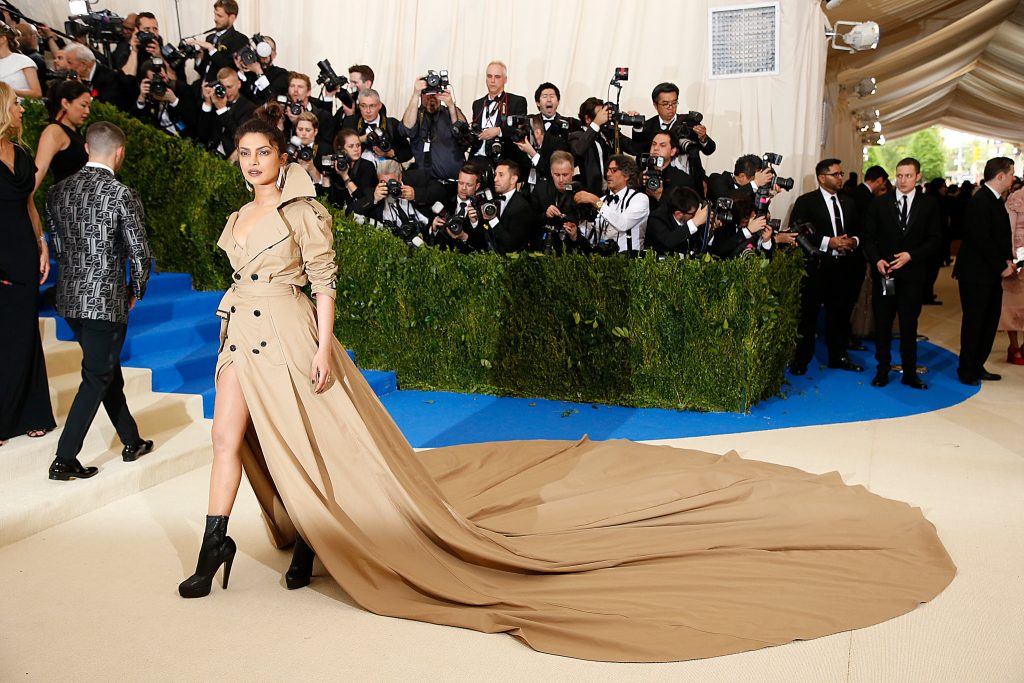 The Indian actress attended the Met Gala event for the first time, “I will probably faint, but it’s so cool,” said Chopra. Priyanka looked stunning in her glittering gold Ralph Lauren dress on Monday. Ralph Lauren and Priyanka had classic reference points in mind for the red carpet event, resulting in a trench gown.

Priyanka’s dress totally followed the Met Gala’s theme which needed four hands to get out of the hotel’s lobby. Chopra wore Jennifer Fisher jewelry and managed to dance on the floor anyway. The floor-sweeping trench gown easily converted into a mini-dress when Rihanna’s epic late night party came up. 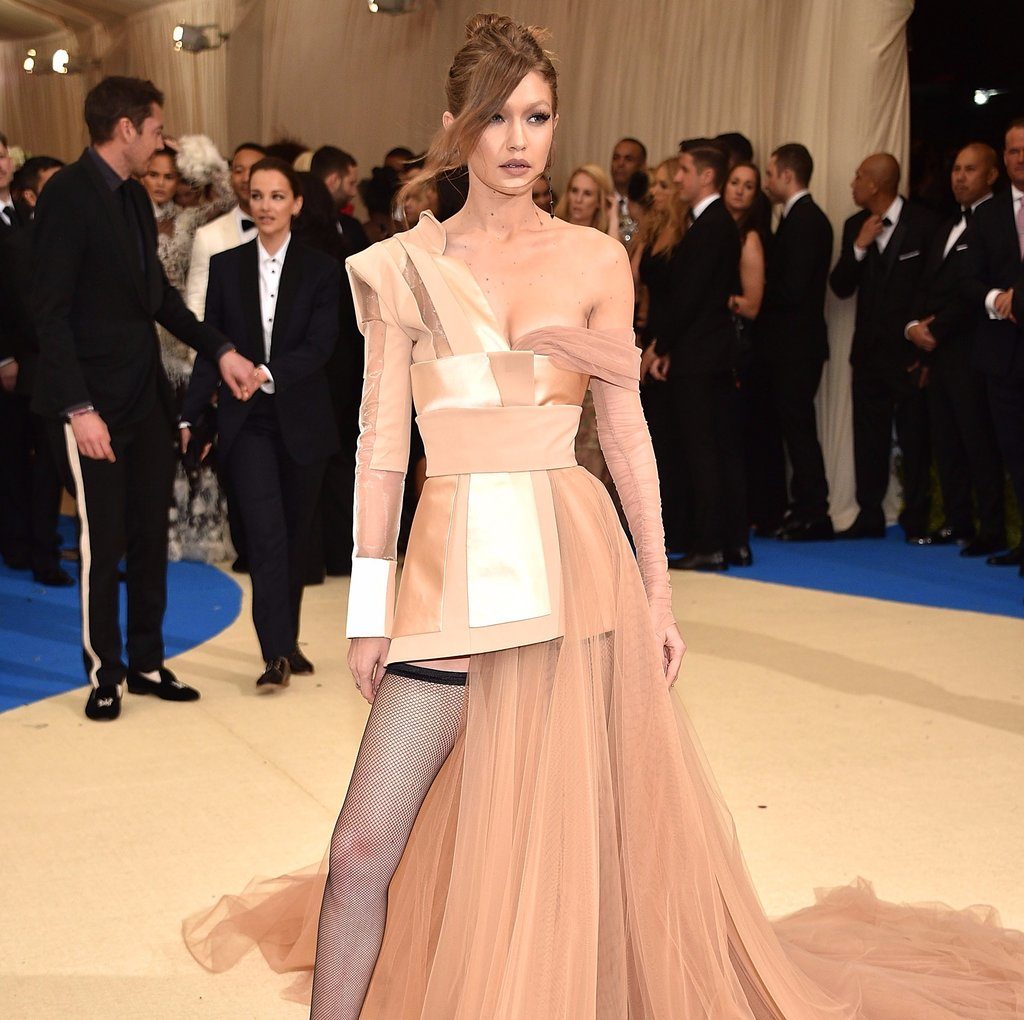 Gigi Hadid is popular for her great taste in clothing and fashion.

The 21-year old model attended the Met Gala 2017 event in Tommy Hilfiger, displaying her leg in an asymmetrical champagne gown. She did not disappoint her fans and everyone simply loved her elegant, off-shoulder dress.

The gorgeous girl came with Zayn Malik last year, however, this year she preferred to come alone.

Bella Hadid: The Cat Woman of the Met Gala 2017 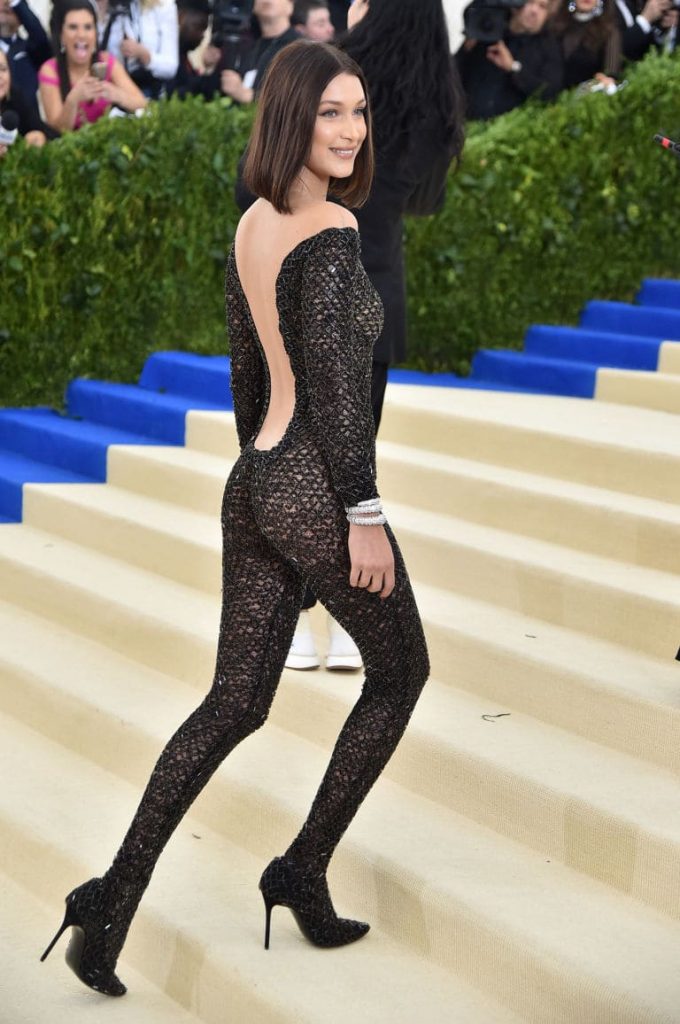 Bella Hadid completely rocked the event in her cat woman dress. Her catsuit was designed by none other than Alexander Wang. Wang is the one who can translate Bella’s steamy rocker style to the red carpet. Hadid said, “I love a sexy look, so I knew Alex was going to do that for me. In fact, the dress is exactly like the sketch which Alex showed me.’

Hadid totally ignored her ex-boyfriend, The Weeknd at the mega event. Shocking facts to know? She cut her hair off a few hours before walking on the red carpet. 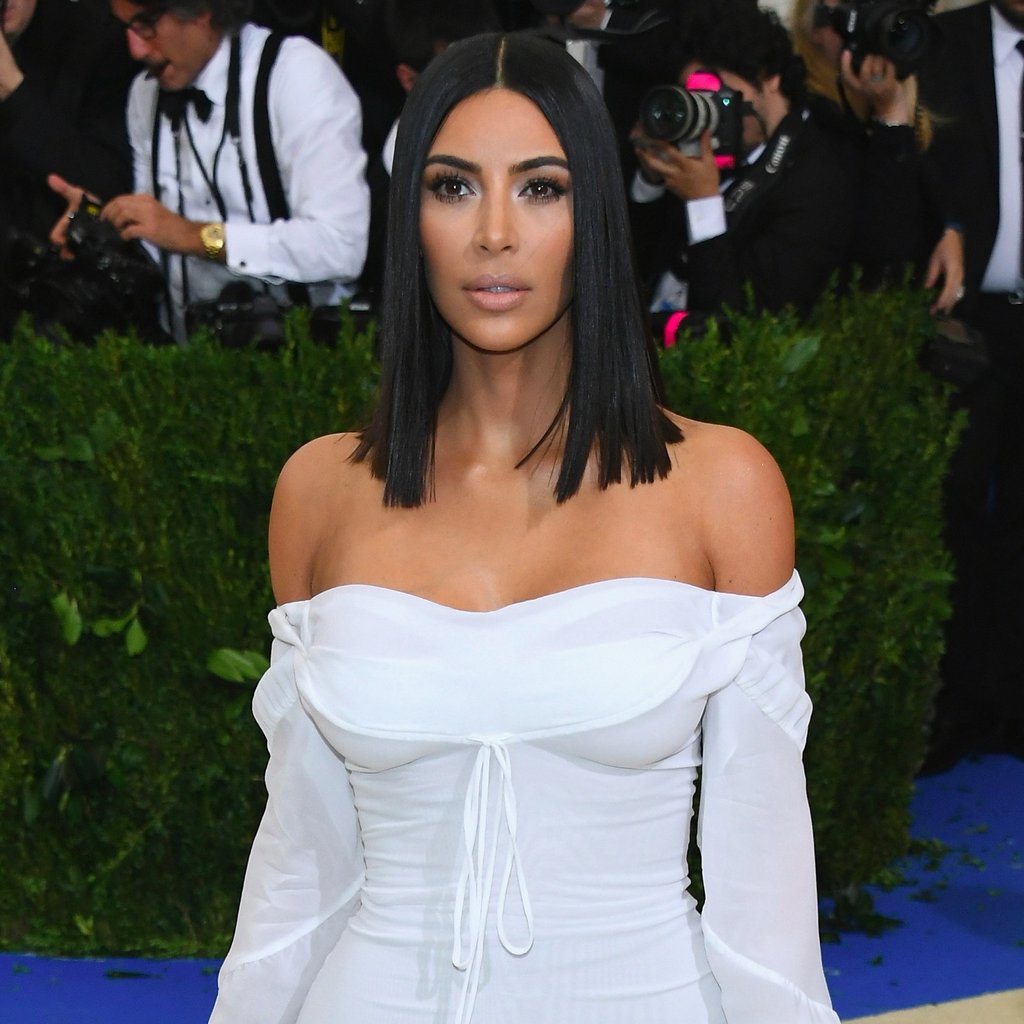 Kim Kardashian West surprised everyone, first, by coming solo to the big night. Secondly, she wore a simple yet elegant dress. I mean, we were not expecting Kim to come this way. While everyone was preparing to wear heavy jewelry and dramatic dresses to follow the avant garde theme, the actress wore a subdued and streamlined slip dress. The piece designed by Vivienne Westwood could have been considered as the entrepreneur’s most avant-garde yet, because of its surprisingly simplistic approach to eveningwear. Kim, you looked gorgeous on Monday! 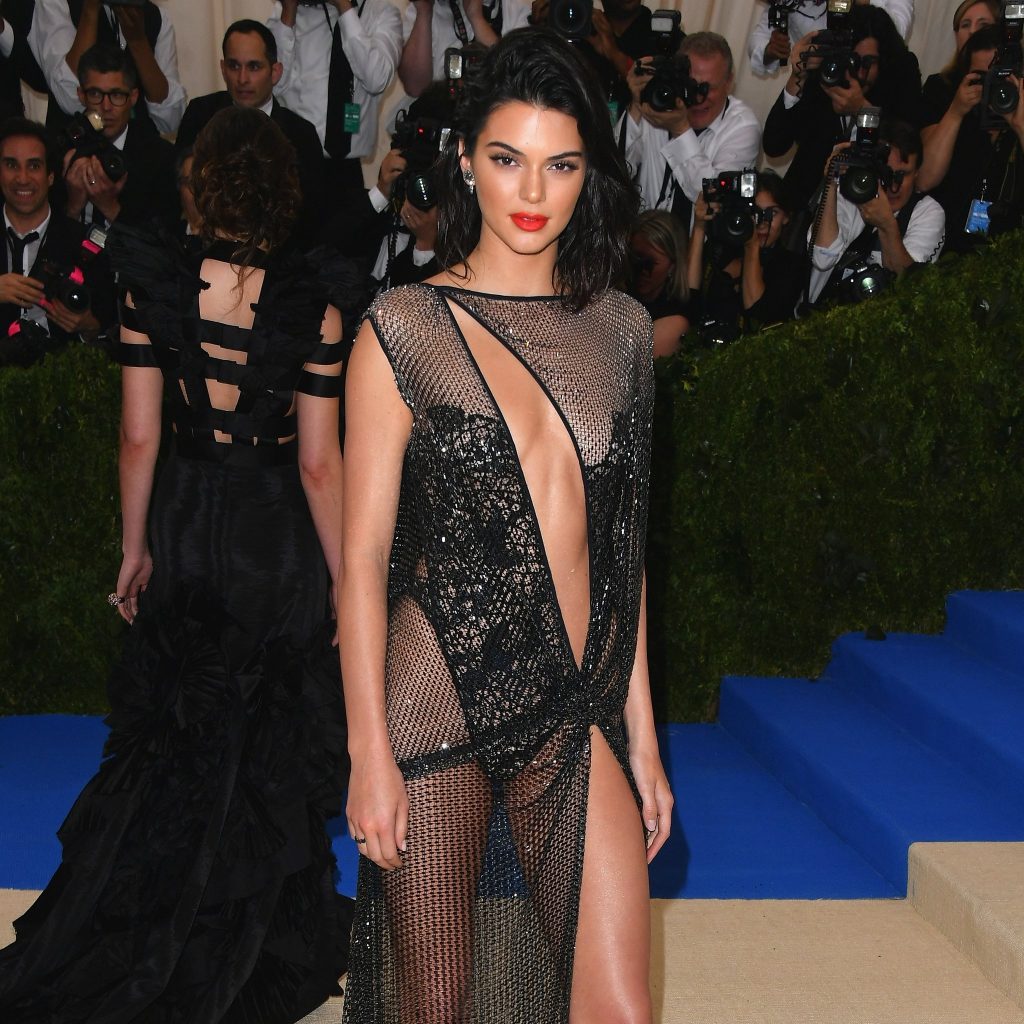 The supermodel wore a nearly naked outfit to the Met Gala in New York. Julia Haart designed her dress, saying that, “When I created the dress, it was made with Kendal in mind. The dress is revealing and sensual, but easy and simple as well.”

25 thoughts on “Met Gala 2017: All the Celebrities in Avant-Garde Theme”

Hello! I just wish to give a huge thumbs up for the very good information you’ve gotten appropriate here on this post. I will likely be coming back to your weblog for far more soon.

However how do oneself do it, the place do they occur versus?

Sorry, but most so called celebrites looks ugly.

Today, I went to the beachfront with my kids. I found a sea shell and gave it to my 4 year old daughter and said “You can hear the ocean if you put this to your ear.” She put the shell to her ear and screamed. There was a hermit crab inside and it pinched her ear. She never wants to go back! LoL I know this is totally off topic but I had to tell someone!

great publish, very informative. I’m wondering why the opposite experts of this sector don’t notice this.
You must proceed your writing. I am sure, you’ve a huge readers’ base already!

This is really interesting, You are an overly professional blogger.
I’ve joined your feed and look ahead to searching for extra of your wonderful post.
Additionally, I’ve shared your web site in my social networks

Please let me know if you’re looking for a author for your
blog. You have some really great articles and I believe I would be a good
asset. If you ever want to take some of the load off, I’d really like to write some content for your blog in exchange for a link
back to mine. Please blast me an email if interested. Kudos!

My spouse and I stumbled over here coming from a different web address and thought I might check things out.
I like what I see so i am just following you. Look forward to looking at your web page repeatedly.

You are so cool! I don’t think I’ve read something like this before.

So good to find another person with genuine thoughts on this subject.
Really.. thanks for starting this up. This website is something that’s needed on the internet,
someone with some originality!

Excellent website. Plenty of helpful information here.
I am sending it to several buddies ans additionally sharing in delicious.
And naturally, thanks to your sweat!

Hey! I’m at work surfing around your blog from my
new iphone X! Just wanted to say I love reading through your blog and look forward to all your posts!
Carry on the excellent work!

We absolutely love your blog and find most of your post’s to be exactly I’m
looking for. Does one offer guest writers to write content available for you?
I wouldn’t mind publishing a post or elaborating
on a number of the subjects you write related to here.
Again, awesome web log!

This piece of writing will assist the internet visitors for building up new webpage
or even a blog from start to end.

I blog frequently and I genuinely thank you for your content.
Your article has really peaked my interest. I will bookmark your website
and keep checking for new details about once per week.
I subscribed to your RSS feed as well.

It’s remarkable designed for me to have a site, which is useful for my knowledge.
thanks admin

Wow, fantastic blog layout! How long have you been blogging for?
you made blogging look easy. The overall look of your web site is great,
as well as the content!

Hi, I do believe this is a great site. I stumbledupon it 😉 I may come back yet again since i have bookmarked it.
Money and freedom is the best way to change, may you be rich and continue to help others.

You’re so interesting! I don’t believe I’ve truly read through anything like this before. So wonderful to discover another person with some unique thoughts on this subject. Really.. thank you for starting this up. This site is something that is required on the internet, someone with some originality!

Thanks for finally writing about >Met Gala 2017:
All the Celebrities in Avant-Garde Theme – Discount Codez <Liked it!

Keep up the good work! Thanks.

I like the helpful information you provide in your articles.
I’ll bookmark your weblog and check again here regularly.
I am quite certain I will learn plenty of
new stuff right here! Best of luck for the next!

Just wish to say your article is as surprising. The clarity in your post is simply cool and i can assume you’re an expert on this subject. Well with your permission let me to grab your RSS feed to keep up to date with forthcoming post. Thanks a million and please keep up the rewarding work.

I really liked your article. Great. 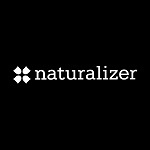